This is my assessment of Brexit, and will attempt to be as fair as possible.

I will try and avoid the hyperbole, and expose the concerns that people had on both sides of the argument. The vast majority of British people are decent, thoughtful people - and the choice to leave was the unfortunate consequence of a series of related events. 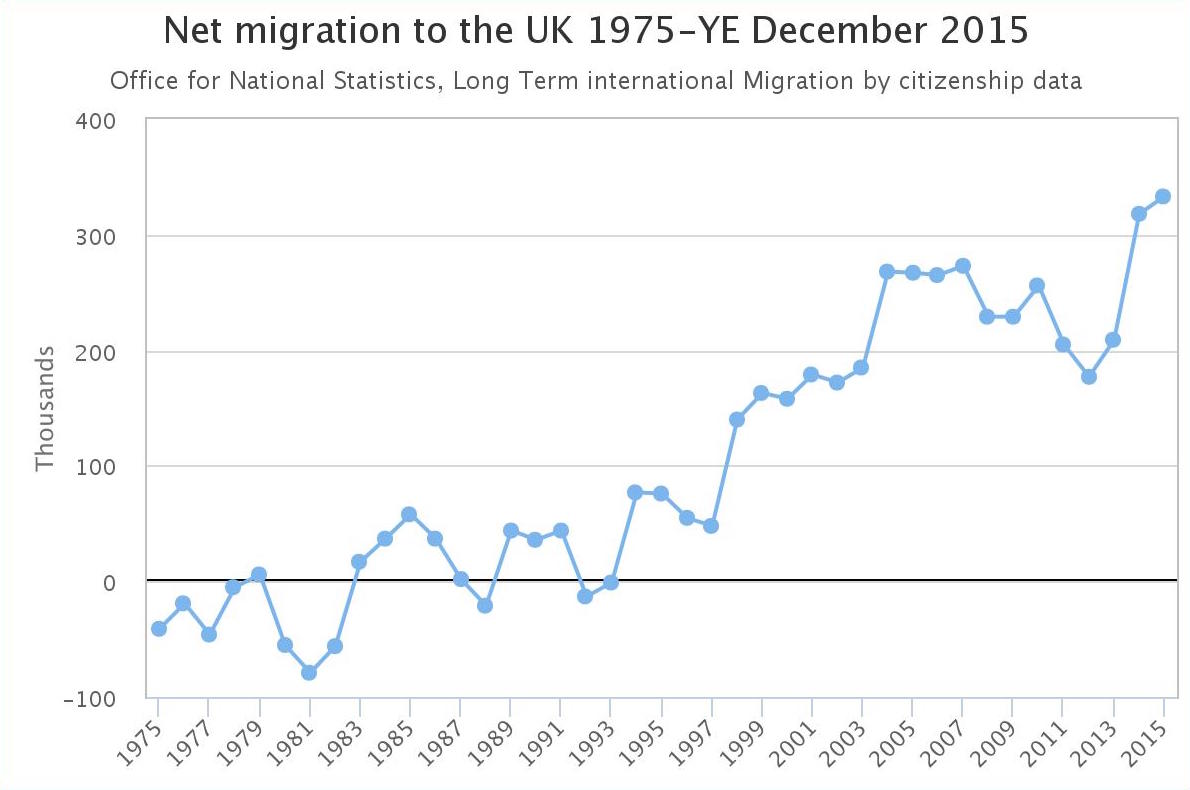 From the above chart you can see the level of net migration into the UK. By the end of 2015 it stood at roughly 330,000 annually - which is around 0.5% of the overall population.

The problem with charts like this, which are strongly trending upwards, is people’s imaginations go wild. If you extrapolate out the overall trend, where does that leave us in 5 years time? We could be looking at considerably higher levels of migration than we see currently.

This referendum was being billed as a once in a generation decision. It was held at a time of record levels of migration into the UK. If the context was different - i.e. migration had been stable over the last few years, then people wouldn’t have been so fearful.

This brings us to the failure of the EU.

The EU has been unyielding in its support of free movement of EU citizens. Free movement is a good thing - but completely uncapped, mass migration is another thing entirely.

A country cannot plan effectively under these circumstances. How many schools and hospitals are required to provide adequate public services? Where does the budget come from for these additional services?

Aside from the pressure on public services, the UK also has a dire housing shortage. Far fewer houses are being built than are required, and we are falling further behind every year.

The EU needs sensible caps on immigration. If the UK could cap immigration at say 0.5% of its population annually, this would allow for a gentler level of growth (this is equivalent to adding another Wales every 9 years). At least then, in the electorate’s minds, they don’t have fantasies of completely unchecked migration numbering in the millions each year.

The unyielding principles that the EU is based on are too divorced from reality. If they had made some concessions, I have little doubt that the UK would have voted to remain.

The benefits of immigration

There are of course some people who want a complete stop to immigration. I am not one of these people.

The UK gets a good deal from immigration (as long as we have the services and infrastructure to support it).

The majority of migrants are of working age - which helps offset our ageing population. This has the effect of reducing the pressure on Government debt over time.

For every nurse who chooses to come and live in the UK, we are getting a qualified, urgently needed professional - who was trained for free. The country they migrated from gets a terrible deal.

Beyond the influx of skills that immigration brings, it also enriches our lives with new relationships and culture.

There are many myths about people just coming to the UK to claim benefits. This is not true. A person who is motivated enough to leave their own country, and make a life abroad is unlikely to arrive at their destination and do nothing. These people are driven to make a better life for themselves through hard work.

And lastly, certain industries (and indeed the NHS) would struggle to function without migrant workers.

Migrants are a valuable part of UK society, but without a sensible framework for managing immigration it was inevitable that it would cause tensions, which were exploited by the leave campaign. Ironically, immigration is by no means the most pressing issue that the UK faces, but it dominated a lot of the discussion around Brexit.

The UK is a deeply divided society. We are divided by geography and age. 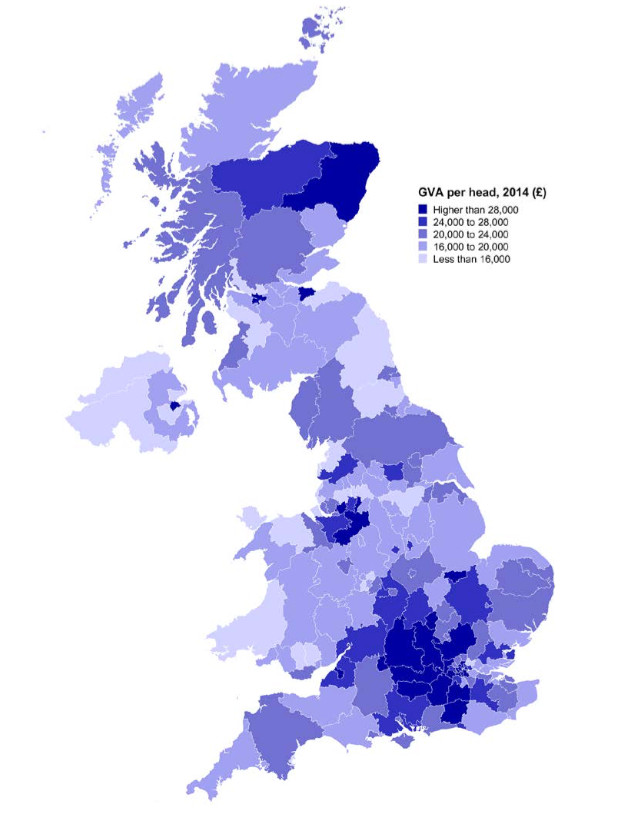 Economic growth has been dominated by the South East of England in recent years, and in particular London. Many parts of the UK are hurting economically, having experienced decades of stagnation or decline.

The perspective of someone on minimum wage, struggling to make ends meet, is very different to a young professional in Central London. The status quo has failed many people in this country, and they feel let down by politicians.

Cameron made a massive miscalculation in agreeing to this referendum. It shows a lack of understanding of people in the UK, particularly outside London.

This is probably the most famous Brexit chart. It shows the overwhelming amount of support for the leave campaign coming from older people, whilst the converse is true for younger people.

It has been characterised as older people destroying future opportunities for the young. Sadly, this is likely to be the outcome, but this probably wasn’t their intention when they voted.

The age group which are most sensitive to pressure on public services are the elderly - particularly the NHS.

Furthermore, they are the least well equipped to deal with a changing world, and want to preserve an image of old Britain, even though it’s at odds with the current world we live in.

The characterisation of old people as malicious is unfair - they voted in their own self-interest, just like everyone else. It just happens to deeply harm younger people, who can better appreciate the benefits of a connected world.

Against the backdrop of these societal tensions, the leave campaign made many substantially misleading claims.

The main strapline of the leave campaign was ‘lets take back control’.

What exactly were they taking back control of, and does it matter?

Most EU legislation is highly progressive, and benefits our human rights, the environment, and allows us to trade freely.

Some people wanted control over immigration levels - this is very different to wanting to take back all control. Do we really want to be writing our own technical standards? Are the British people really so unique to require different human rights to other countries? No.

The most pressing issues we face require collaboration. Climate change doesn’t respect national borders. Terrorism requires the sharing of information between countries. We now have less control over our future.

The great irony of Brexit

The leave campaign were so brazen with their lies, they even put them on their campaign bus. 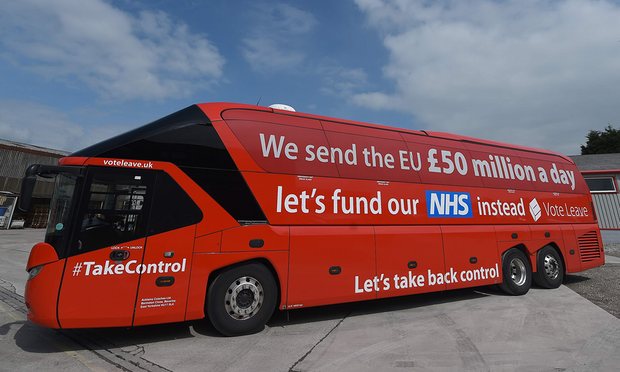 The UK is a net contributor to the EU, but leaving the EU doesn’t make these funds available for the NHS.

Norway is outside of the EU, and in order to have access to the single market it pays the same as if it was an EU member.

If the UK gets a trade deal with the EU, which we’ll need to stop our economy from tanking, we will be no better off.

The leave campaign needs to be held accountable for these lies. They deliberately mislead the British public, and have launched us into a time of economic turmoil - just to advance their own political careers. Rather than repairing the reputations of politicians, they have reached new lows.

Judging by the economic turmoil following the referendum, this was a disastrous decision for the UK. People will be asking, how could the UK inflict this upon themselves?

I can only hope that the UK can recover from this awful setback.