A well known trend amongst manufacturers around the globe is that they’ve become more and more service orientated.

They often sell high value services which relate to their manufactured products. These can include support contracts, and access to software based services.

Alongside this phenomenon has been the growth in the percentage of the economy constituted by service companies. The services sector currently makes up 77.5% of the overall UK economy, and 76.8% of the US economy [1].

So is there is a consistent and unstoppable trend towards more and more services, and fewer and fewer manufactured goods?

Not necessarily, because just as manufacturing companies can morph into more service orientated businesses, it’s also possible for service companies to move the other way too.

A venerable example is McDonalds, which made this transition decades ago.

McDonalds as an example of a prolific product innovator

It’s easy to overlook just how radical McDonalds was when it emerged in the early 1940s. Up until that point restaurant food was served on plates, and waitresses served you at your table. McDonalds turned that thinking on it’s head. 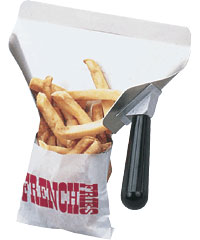 McDonalds has been a great technical innovator as well as a service innovator. Who do you think invented the fry funnels for filling paper bags with fries? That’s right - McDonalds.

No manufacturer at that point would have been making fry funnels. Where was the market? McDonalds created the market - they were their own lead users. They understood their own needs better than any third party could.

That product is now used by practically every single fast food restaurant globally which serves fries.

In the book McDonald’s: Behind the Arches, John Love sheds light on the degree of technical and product innovation which took place at McDonalds.

“They invented the most efficient cooking equipment the food service industry had seen.” [2] (p119)

Some of the other technical innovations included solving air conditioning problems for the incredibly compact McDonald’s kitchens. The solution was a roof top air conditioner which was smaller and cheaper than standard industrial units.

Another example is the development of the ‘potato computer’ - a sensor fitted to the fry vats to carefully control temperature, which resulted in the famously consistent McDonalds fries.

There are countless other examples, where McDonalds have improved upon existing products, or developed entirely new ones to fit their needs. These products were then sold to other companies through another company owned by Ray Kroc which ended up manufacturing ‘dozens of kitchen tools produced by McDonalds designers’ [2] (p139).

UPS and Zipcar - other product innovators

Is this phenomenon constrained to McDonalds?

Here are some more examples - the handheld computers used by UPS delivery drivers. Starting in 1991, UPS was the first in its industry to equip drivers with such devices [3] and has continued to improve upon them ever since. UPS recently announced the fifth version of this device [3].

Zipcar developed a system which is installed in cars to allow remote locking and locking of the cars, along with vehicle tracking, and other functions. 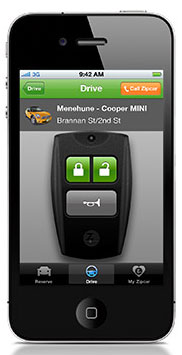 This is not only a key enabler of their service business, but they have also been able to innovate this device/system to a world leading level. They have even released an iPhone app which allows you to honk the horn of the nearest Zipcar, helping you to locate it [4]. How long until we see these kind of apps used for privately owned vehicles? Can’t find your car in a large car park? Try honking the horn via an app.

I believe we’ll continue to see these kinds of innovations emerge from service businesses - particularly ones which solve business process and operational problems. These devices can emerge as key competitive differentiators in an increasingly competitive service driven economy.